4 days of the most beautiful cycling scenery.

A guest blog from Simon, our support crew and photographer for our latest geneva 2 Milan route. Find out more about the route here

The Italian Lakes had always been on my bucket list so when I was offered the opportunity to get paid to see them it was a no brainier ! Tasked with being part of a 3 man crew to assist 8 good friends cycle from Geneva to Milan I packed my bag and off I went.
The starting point was Geneva, a beautiful city surrounded by the Alps which lies on the Lake that has the same name. The cyclists and crew all met each other the night before over lobster and beers…as you do !

At 8am’ish they were unleashed for the 4 days and 335 miles to Milan. The first stop, a quick photo call, was only after 1 mile to have a quick pose on the Pier in front of the “Jet d’Eau”. Sadly, however, someone forgot to turn it on for us but the Lake and Alps still provided a fantastic back drop.

So, off the riders went again. This day’s ride was 99 miles to the Swiss town of Saglesch. The first 2hrs cycling was alongside the Lake and each turn opened up a new view that took your breath away. And so that theme continued throughout the day. Looking back I can easily say that this day’s route was the most scenic that I have ever had the pleasure to travel along. The Lake, the mountains, the green fields, the pretty towns, the quiet roads, the meandering streams, etc etc. We even managed to squeeze in a lunch stop at the UCI Headquarters in Aigle!

And in case you’re wondering, the route was a cyclists dream. Not too hard and not too easy…perfect

. After a few coffee stops and a leisurely lunch the smiling cyclists reached their hotel and quickly settled down to a cold drink or two or three !

On to Day 2. A leisurely 75 miles today…except that it has a 10,000 ft climb up to the Nufenenpass ! Over breakfast it was clear that the cyclists were a bit anxious over what was ahead of them. It didn’t help that they hadn’t had a good nights sleep. The nearby church, keeping to its local custom, rung its bells every QUARTER of the hour through the entire night. I am surprised the bells are still in one piece ! So, after a few bike repairs by Ebba the handy mechanic, the cyclists set off again. However, it wasn’t long before they started the first climbs of the day. Just a little warm up for what laid ahead. A coffee stop and a lovely lunch later the cyclists were prepped and unleashed by Sam, the Crew leader. They were now cycling into the mountains ahead and the Nufenenpass. It started off with long gradual roads which were nice and quiet and meandered through the beautiful scenery. As with day 1, each turn delivered a new “wow” moment. The cyclists were now splitting up and riding to their own individual ability. Each time they passed me, as I took photos, I expected them to unleash expletives at me and to leave them in peace. Instead they grimaced and always murmured “how much further”. The road was now tighter and steeper with switchbacks. When they left lunch it was a barmy 20c.

Now it was decidedly colder and cloudier…we are getting higher ! Eventually, one by one, they all made it. Smiles broke out as they posed by the sign at the top and then headed straight into the warm cafe and tucked into a well deserved hot drink and delicious looking warm apple pie. The temperature was now only 9c and the clouds were coming in. Time to go now and they had a 14 mile decent all the way to the hotel. Again a mixture of long sweeping roads and switchbacks and for the speed freaks a cyclists dream. Funnily enough, when they reached the hotel it was time to consume cold drinks again (and again) and curse the mountain that they had just conquered. 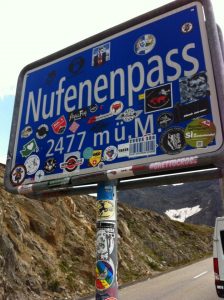 Day’s 3 and 4 unfolded in much the same way. Beautiful scenery, sunshine, lovely roads and towns, tasty food and even time for a lunchtime swim in Lake Maggiore. 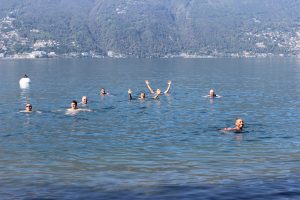 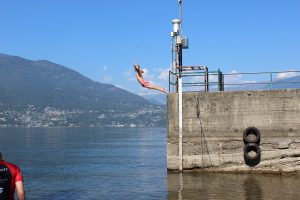 Eventually the final ride into Milan and ending in the lovely Piazza Duomo. What an adventure for 8 good friends who just kept smiling and pedalling all the time. I take my hat off to them and I am now frantically pestering my friends to cycle the same route with me next year. Fingers crossed

Any cookies that may not be particularly necessary for the website to function and is used specifically to collect user personal data via analytics, ads, other embedded contents are termed as non-necessary cookies. It is mandatory to procure user consent prior to running these cookies on your website.